What if Koch Industries offered burial insurance as a benefit for temporary employees doing clean up on toxic spills, a common need in the petroleum industry? You might think, well at least they are being given something!

Wait. Let's consider for a moment what happened to the low level employees who cleaned up the Valdez Spill which took place on Prince William Sound, Alaska, March 24, 1989. According to Susan Shaw, a toxicologist, these cleanup workers have all died. This gave them a life span of 52 years when the average life expectancy in America is 78.

Quite a difference there. That is an average loss of 26 years of life, which is deceptive because people struggle with a range of conditions after being exposed to toxic waste which drains them, and their families as they struggle and die.

How much is a year of your life worth? Shaw estimates 150,000 clean up workers were involved in the BP gulf spill. Due to the huge amounts of Corexit dispersant used together with the close contact they may fare worse than the Valdez workers.

Now, let's look again at the practice of insuring low level employees, a practice generally referred to as taking out 'peon insurance.'

Insuring the lives of low level employees by corporations is carried out routinely today. Premiums are paid on the policy. The employee is oblivious. He or she can be fired or quit but corporation keeps paying until the employee dies. Then, a check is cut by the insurance company and sent to the corporation which made the payments.

Many have been outraged that the family of the dead employee did not get a portion of the money paid out. But the real issue is that using insurance policies allows corporation to avoid paying taxes. This is a corporate tax dodge. The corporation borrows the money to pay the premiums. The interest on such money used to pay premiums is tax-deductible. The eventual payout is tax-exempt.

Employees, in most industries, are not harmed or benefited by the action of the corporation. Not true for cleanup workers.

Would the Kochs do this?

In their case the cleanup worker loses 26 years, or more, of life and Koch Industries gets the insurance payout and the tax-exemption on their premiums. If they are feeling generous the Kochs provide a burial.

The question should be are they doing this yet?


Posted by Melinda Pillsbury-Foster at 7:10 PM No comments: Links to this post

English, Dutch and German settlers brought their own variations of the game to America. Washington Irving's Rip Van Winkle awakens to the sound of "crashing ninepins." in 1819.

Arguably, the first permanent American bowling place, for lawn bowling, was in New York's Battery area, now in the heart of the financial district. The small plot is still called Bowling Green.

But ten pin bowling did not take off as a major sport in America until the 1950s, following the introduction of the first rubber ball, the "Evertrue" in 1905 and Gottfried Schmidt's automatic pinspotter. Owners of bowling establishments were no longer dependent on "pinboys." 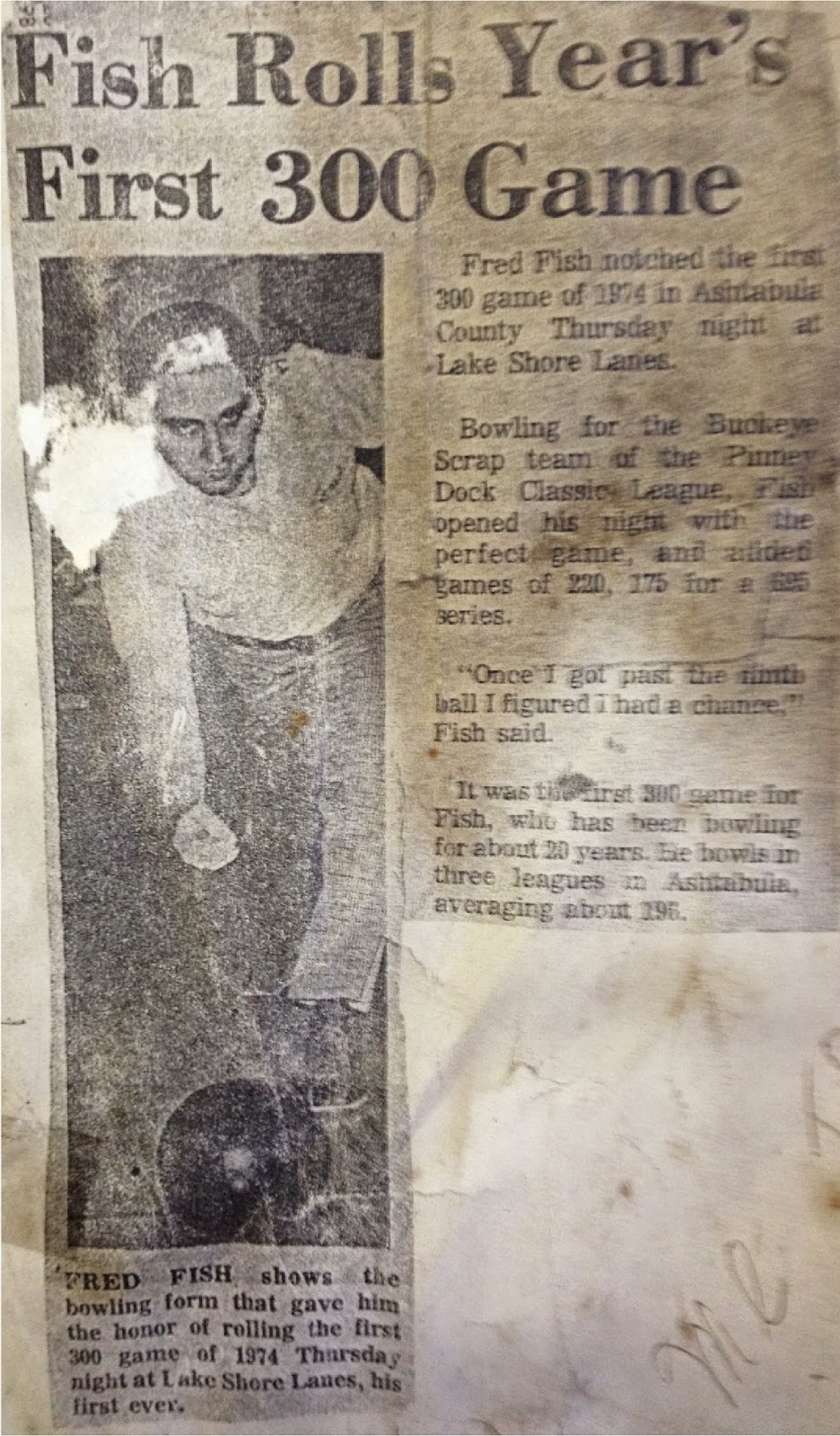 The subject came up during the hour and 15 minutes I waited for a City Taxi Cab to arrive at Perry's Automotive the other day. On the wall was an article from the Star Beacon chronicling the first 300 game of 1974 played by Fred Fish at Lake Shore Lanes. Fred works at Perry's. Fred said he no longer bowls because of the cost, remembering the four games for a dollar he paid in 1974.

According to the cumulative rate of inflation if Lake Shore's management had raised their prices along with other costs of living the price for those four games would be $4.79, with a rate of inflation of 379.0%. Lake Shore on occasion offers all you can bowl coupons for $10.

America went off the gold standard in 1913 with the establishment of the Federal Reserve, whose stated goal was to provide stable prices. In 1913 a loaf of bread cost about a nickle. Today it costs about $1.45.

So, where did the money for bowling go? When you find out tell Fred.


Posted by Melinda Pillsbury-Foster at 6:27 AM No comments: Links to this post


- “While I am a great believer in the free enterprise system and all that it entails, I am
an even stronger believer in the right of our people to live in a clean and pollution-free
environment.” ~Barry Goldwater

Barry Goldwater was a real conservative. If you are a Libertarian today you should know most of us who poured our energy and hard earned money into building the Libertarian Party had supported Barry for president in 1964. The fact was being a Conservative who understood the issues of social justice was what made you a Libertarian, a conservative just like Barry.

Barry believed a Conservative was someone who opposed wars carried out for corporate profit and not in defense of America.

In Barry's mind a Conservative believed you did not, “have to be straight to aim straight,” to serve in the military.

Barry and his wife were early supporters of a woman's right to choose. It was not about approving of abortion. It was about acknowledging it was none of his business because women own their bodies.

And in Barry's mind those engaging in commerce assumed the entire liability for damages done as a result of their actions. No preferences for those who donate heavily to political campaigns. No buying votes, either in Congress or at the 1979 Libertarian National Convention.

In 1979 the Kochs bought votes so they could control the Libertarian nomination for President and Vice President. Their agents in this included Edward H. Crane, III, Howie Rich, and John Fund, among others. The campaign they ran for president ignored the real issues of freedom. Many of us were shocked to hear the rhetoric of freedom, our ideas, coming from the mouth of Ronald Reagan who, Californian's knew, had done more to eliminate local governance and centralize state power than had ever been imagined by an Liberal Democrat.

The United Republicans of California had trusted Ronnie. In 1975 they passed a resolution at their state convention begging Americans not to vote for Reagan if he ran for President or Vice President.

And that, in a nutshell, is the Brothers Koch and the entire Big Oil industry for which they set the moral and business standards.

Calling something 'Free Enterprise' does not make it so - and David was a terrible dancer.
Posted by Melinda Pillsbury-Foster at 7:25 PM No comments: Links to this post

Dave was recruited by Union Oil when he was fourteen in 1969. The Santa Barbara Oil Spill had taken place. It was a public relations disaster for the entire industry.

At the time, Dave planned to be an astronomer. This changed when Union Oil's 'scouting representatives' walked into his class, announcing they were looking for 'young scientists' to participate in an exciting program and teach them about the future of modern technology.

At the time, Dave was completing his work to become an Eagle Scout. He was a natural recruit to sell the good intentions of Union Oil. Scripts of well-honed lies were provided to Dave and his fellow recruits.

Dave was a trusting kid, excited by the attention and promised opportunities. Union Oil took over his life. In college they decided which classes he would take and how his time would be spent. During summer vacation he worked for them, carrying out highly responsible work. He never made a mistake twice.

Twenty years later Dave Lincoln had worked for every major oil company on every continent. He was earning a six figure salary, handling relations with foreign nations, and locating oil reservoirs and planning pipelines. But he still believed it was his duty to ensure the environment was not harmed.

He had started writing reports showing corporate management how problems could be handled without causing harm.

In 1996, sitting in a high level management meeting on a Nuclear Power Plant for India he heard Ken Lay, Enron President, say, “if they don’t like the way we conduct our business we'll just replace their politicians.” Lay continued, “If those people in India didn’t like the price we charge for electricity we can have the State Dept. and the US Army explain it to them.”

These same strategies were outlined in John Perkin's book, Confessions of an Economic Hitman.

Dave walked away from his job. Returning to the US he discovered environmental groups, and those who ran them, were also focused on their bottom line. Most receive huge funding from Big Oil. But Dave was able to stop irresponsible development when, and where, he was allowed to do so.

The Keystone is uneconomic, poised to produce oil at $70 when Saudi Arabia can do it for $10. Can Dave stop the Keystone? One man against Big Oil with the power of billions of dollars behind them? Watch and find out.
Posted by Melinda Pillsbury-Foster at 12:30 AM No comments: Links to this post

Melinda Pillsbury-Foster is a journalist, author, poet, and activist.

For more on her interests and writing see: Pillsbury-Foster

The columns appearing here were written for publication in the Star Beacon, a small paper in Ashtabula, Ohio.

You really need to know.